How HostGator used InVision to scale their design system

HostGator is part of a global family of online brands, Endurance Group. A major player in online hosting, HostGator’s team has used the InVision platform to collaborate around design for years.

To improve the design process even further and deliver more cohesive customer experiences, they added InVision Design System Manager to the mix. Using DSM, they were able to create an MVP design system to demonstrate to stakeholders how the system could help them work better and reach business goals faster.

HostGator’s design team wanted to work more efficiently, improve collaboration with developers, and ultimately provide customers with more consistent experiences. Building a design system was the solution, but the team struggled to communicate its value to stakeholders, who were reluctant to allocate time and resources to the effort.

The team needed to devise a more creative, impactful way to get executive buy-in and move the project forward.

With InVision DSM, HostGator’s team built a minimum viable product—or MVP—which helped developers, executives, product managers, and other stakeholders better understand how the design system would work and its benefits to the business.

When we called it a design system, people didn’t get it. Once we made the MVP, it started clicking in people’s heads. When they saw what it was, it was a game changer.

Building an MVP not only gave the design team an opportunity to take ownership of the design system, but it helped them gain support across the organization. Rather than just talk to stakeholders about what a design system could do, the team used the MVP to show them the value—walking people through the components, and creating excitement about the system’s progress. 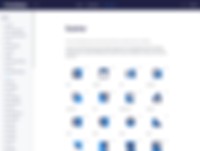 HostGator was simultaneously executing a redesign and rebrand, so the design team used that project as a springboard to demonstrate how using a design system could transform the design process. They understood that it was more strategic to release something quickly with an MVP to gain executive buy-in, and then use it as a blueprint for future iterations.

Without a shared language and workflow achieved through a design system, designers and developers waste time on rework and struggle to maintain consistency. HostGator's design system improved cross-functional workflows by connecting design and code so their team can focus on the big picture: creating great customer experiences.

You now have this proactive piece that you can bring to the table to convince leadership and other teams of the importance of your design system. When it comes down to collaboration, you can use the same MVP to bring others on board, as well.

Transform your team with InVision. Here’s how.
Get expert advice

Talk with InVision about building a design system like HostGator.

InVision’s more than a platform. We’re a partner.

The Total Economic Impact ™ of InVision

We focus on your bottom line

We support the advancement of leaders

We help you gain insight into your business